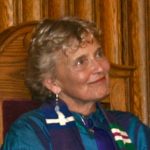 Rev. Susan Frederick-Gray is the first woman to serve as President of our Unitarian Universalist Association, elected at General Assembly 2017.  Rev. Rosemary Bray-McNatt is President of Starr King School for the Ministry in Berkley, California, called to that post almost four years ago.

Rev. Dr. Serene Jones, while not a Unitarian Universalist, is President of my own alma mater, New York City’s Union Theological Seminary, from which so many of our UU ministers have graduated, including Rev. Cheryl Walker, President of our Unitarian Universalist Ministers Association. I sing the praises of Rev. Dr. Hope Johnson and Dr. Janice Marie Johnson, sisters who have served our larger UU world for decades and have both been mentors to me.  I give thanks also for the ministry and mentorship of the late Rev. Dr. Marjorie Bowens-Wheatley, also author and activist.

Let’s all sing songs of thanksgiving for the life of the late Denise (Denny) Davidoff, who most recently served as relentless fundraiser and publicist for Meadville-Lombard Theological School in Chicago.  For eight years (1993-2001), Denny served as Moderator of our UUA. Let’s sing out praises also for the journey of Elandria Williams, Interim Co-Moderator of our UUA and member of our UUA Board of Trustees.

Historically, how can we not hold up the pioneering ministries of Antoinette Brown Blackwell and Olympia Brown?  As Antoinette Brown, she was the first woman to be ordained to the ministry, though without the full support of her then Congregational denomination.   The year was 1852.  Two years later she became Unitarian and two years after that married and added Blackwell to her name.  As a vocal abolitionist, women’s rights advocate, minister, mother of seven, and grandmother of who knows how many, she cast her first vote at the age of 95 in 1920!  Years earlier she served as mentor to Olympia Brown, the first woman ordained to the ministry of a major denomination (Universalist) and affirmed by that denomination, though not without struggle. The year was 1853. Like her friend and mentor, Olympia Brown was a tireless advocate for women’s suffrage and at the age of 85 cast her first vote in 1920.

Close to a century after we who are women gained the right to vote, we are still downwind from economic injustice and out and out sexual harassment.   The #MeToo movement is grassroots, born of women (as we all are) and sustained by women.  I am among the millions who can say, “Me Too!”   On this International Women’s Day, I raise my voice in praising my sisters across generations, perhaps my own late mother above all.   Born in 1909, Lillian Elizabeth Edwards (late White) became a nurse in rural Iowa, married my father, raised my brother and me, served her community, and nurtured deep and lasting friendships.

Miles we have walked and miles we have yet to go.  Let us pause today to celebrate our journey. As Arundhati Roy, the luminous Indian author and human rights activist proclaimed: “A new world is not only possible, she is on her way. On a quiet day I can hear her breathing.”