A huddle of prayer halfway around the world.  So those of us on the Soldier’s Heart pilgrimage here in Viet Nam clustered last night as we prayed for the soul of our nation.  Not yet for the Senate.  Yes, for the House!  Miles to go, but hope is alive and in action.

Can it be that I am already a week into this pilgrimage, for which each of the nine of us has our purpose and  varied levels of openness to the epiphanies we are experiencing?  A visit on the first full day here (October 31) to Saigon’s Fine Arts Museum.  Barbara Child and I struck out from our hotel throug 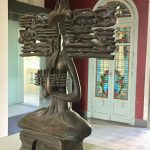 h the non-stop moped traffic to arrive at this magnificent structure that houses Vietnamese art primarily from the past 75 years. Especially striking were sculptures by women of women who took up the weapons of war in defense of their homeland.  I was mesmerized by this sculpture titled simply “Spirituality.”

Gathering for dinner with our group that evening, we shared the stories that led each of us to commit to this pilgrimage.  For four of us, it was the loss of spouses or partners in the war that was. For others, it is professional work with veterans and their families. For yet another, it is research on the impact of war across generations of family.  Our journey intensified the next day, with visits to the Reunification Palace (formerly the Presidential Palace), whose gates were stormed by the North Vietnamese Army on April 30, 1975—Viet Nam’s Day of Liberation from American forces. 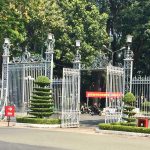 It is where South Vietnamese President Thieu conceded defeat, and helicopters lifted off the roof with hundreds of Americans and those who fought with them on board or literally clawing to get on board. Then to the War Remnants Museum, with sectors devoted to the international peace movement, the storied images of international journalists, and photogra 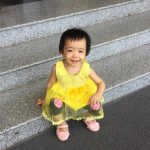 phs bearing the horrific evidence of Agent Orange—with pictures drawn and painted by “Agent Orange children”.  Upon exiting this hall of powerful memory, I was graced by the appearance of this adorable child, dancing and cavorting and ready to play.  May she embody our collective future?

A short walk away is the sculpted larger-than-life bronze memorial to Thich Quang Duc, the Buddhist monk who immolated himself at a busy intersection the morning of June 11, 1963, protesting the brutality of the Diem regime.  The 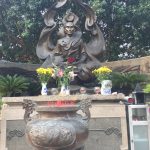 single photograph of this act was seen around the world and marked a turning point in Diem’s inept and brutal leadership, fully supported by our country’s leaders, including JFK, until it met enough resistance that he was assassinated by his own people in early November 1963, with the covert support of the Kennedy administration.  JFK had begun to question U.S. policy in Viet Nam; it was perhaps no coincidence that he was assassinated just weeks after Diem’s demise.

Time to head into the countryside and Ao Dai Museum of traditional life.  What exquisitely landscaped grounds surround this museum of traditional Vietnamese women’s attire, each garment with a story from Viet Nam’s history.  Yet the highlight of this visit was not fashion, but intensive conversation over lunch with a Vietnamese woman whose husband who was killed in 1968, fighting on “the other side”.  We connected with our stories, and Madame Nga pr 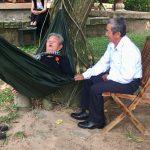 onounced me as her “big sister”, an honor in Vietnamese culture.  Then a Then a gift to us: she and her husband “performed” in song and then asked me to sing for them.  I did: “Come sing a song with me, come sing a song with me…that I might know your mind.  And I’ll bring you hope, when hope is hard to find…”  Know that we are finding it anew here in Viet Nam.