“When we tell our story from deep inside” – okay, but it needs to be our story/my story, and if I seek to tap someone else’s story or even part of it, I need to check with that person for permission and invite editing.  So, with apologies to Lynda Bluestein, this is my revised edition, with noted corrections in the third paragraph.

After bidding farewell to two of our travelers, the remaining eight of us headed north from Hue, into the mountains toward destinations where fellow pilgrim, Lynda Bluestein and I marked returns of soul. Sunlight struggled through the mist to illumine a vista that stretched into densely forested mountains holding the history of lost souls and fallen loved ones on all sides of that war.  As if rising monster-like, the Rock Pile loomed suddenly in the distance.  We stopped on the side of the road, as close as we could g 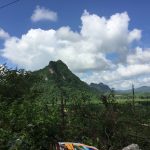 et to this quasi mountain of jagged rocks, where Lynda’s first husband, Peter, was, as Lynda explains, a grunt dropped onto the Rockpile to surveille the VC below not having a clue what he was supposed to do or why. The strategic advantage of the Rockpile was not all that the Marines had built it up to be, and it soon became clear the that the NVA never really wanted to control it, so it was quietly abandoned at the end of 1968. The Rockpile’s original justification was to stop the Ho Chi Minh Trail supply as part of the “McNamara Line”.  The intensive defoliation/Agent Orange use along the Ho Chi Minh Trail around the Rockpile  led to Peter’s cancer when he returned home. 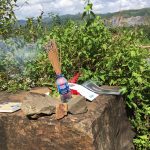 Imagine this outcropping as the backdrop for the ceremony that Lynda led with such grace, and a shelved rock serving as a makeshift altar.  Amid song and words spoken from letters written 50 years ago, we placed fresh flowers and sticks of burning incense on the altar, bearing witness and honoring a loved one whose soul was robbed by war and whose body was vulnerable to my nation’s extensive use of Agent Orange.

Now, how to find a cemetery next to a churchyard in the tiny village of Xom An Loi, where Russell Ray Flesher, my first husband, was killed on February 2, 1968—the heart of the Tet Offensive?  The exactness of this site was known to me only through correspondence with a surviving veteran who had fought with Russ. An Loi wasn’t even on the m 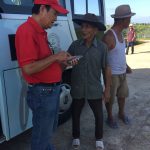 ap.  With stalwart perseverance, Song (Tran Dinh Song, our Vietnamese guide), asked the locals.  So many hadn’t a clue, until…he connected with an elderly man whose family had lived in Xom An Loi for six generations!  Nguyen Van Lanh hopped on his moped and led the busload of us into this tiny hamlet overlooked by the map makers. Lanh knew the exact location we sought. 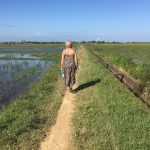 Parking on the outskirts of rice paddies, we saw in the distance a chapel with cross reaching skyward and what appeared to be a cemetery a stone’s throw away. Instinctively I set out solo on the narrow footpaths through the rice 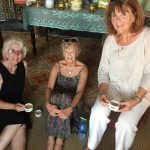 paddies, with my companions close behind. We trekked 4-5 km in afternoon sun that did more than its share on this pilgrimage within a pilgrimage.   At last we reached the road linking us to our destination. With the exception of 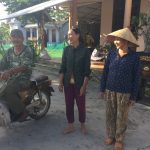 Song and Lanh, we surely appeared as rumpled aliens. Yet a woman with a warm smile and outstretched arms beckoned us to come into her home for rest and refreshment. Family and friends quickly gathered, for we were the first Americans they had seen since the War.  Tea and smiles were fuel for the soul.

We continued on, with Lanh and our new friend accompanying us.  What had likely been a tiny cemetery in 1968 was now formalized with a tile floor, engraved markers, a sarcophagus in the center, and an altar with fresh flowers indicating the veneration paid 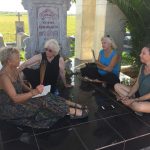 to the deceased.  Bearing our sticks of incense and the flowers we had brought, we sat in a circle, and the ceremony that I had planned unfolded. Alas, Ed could not join us, given severe back pain, and Sebastian and Wes had left for home the day before. Except for Song and Lanh, it was a circle of women, including our dear new friend.   “Return again, return again, return to the home of your soul,” we sang.  I read a poem by Russ, 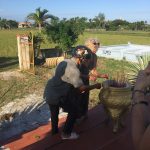 then spoke free-form. I wonder, have you heard “Are you going to Scarborough Fair” with the sotto voce counterpoint? Thank you, Denise, for giving voice to the counterpoint that contrasts the normalcy of going to a fair with lyric shards of war’s realities.  We placed flowers and incense on an altar, with Lanh and the woman who had hosted us for tea joining us as family.

The heart is not linear; nor is this narrative.  We marked the previous day, Armistice Day (aka Veterans Day) with a boat visit down the Perfume River to the pagoda of 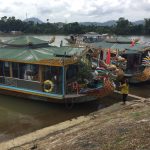 the Buddhist monk Thich Quang Duc (who, in protest against the Diem regime, had 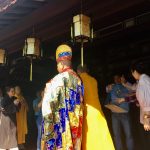 immolated himself at an intersection in Saigon in June 1963). At his pagoda on this glorious day of November 2018, priests chanted and released a host of caged sparrows,  freeing also the souls of loved ones.  Back in our boat, we 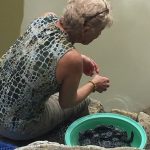 headed further down river to the Taoist Hon Chen Temple honoring Po Nagar, goddess of the ancient Cham minority.  As we began to mount the  steps to her altar, we were waylaid by women holding up baskets of squirming fish for sale.  What were we to do with these fish?  Release them into the waters of the river and free the souls of loved ones in need of freeing, on the other side or on this side.  So we did.

And so I concluded the ceremony at the cemetery with a fragment of song: “Fish gotta swim, birds gotta fly…”

May we all know such release, the freeing of our souls into whatever waters are home.